🏝
Great line up, awesome improv
Anybody checking this?
Top

I was thinking of hitting the Wilbur show in Boston.
With it being a Tue night in January though, ticket sales are poor.
They never even put the 2nd balcony on sale.
Tons of seats to chose from.
Waiting to see what the weather factor is. 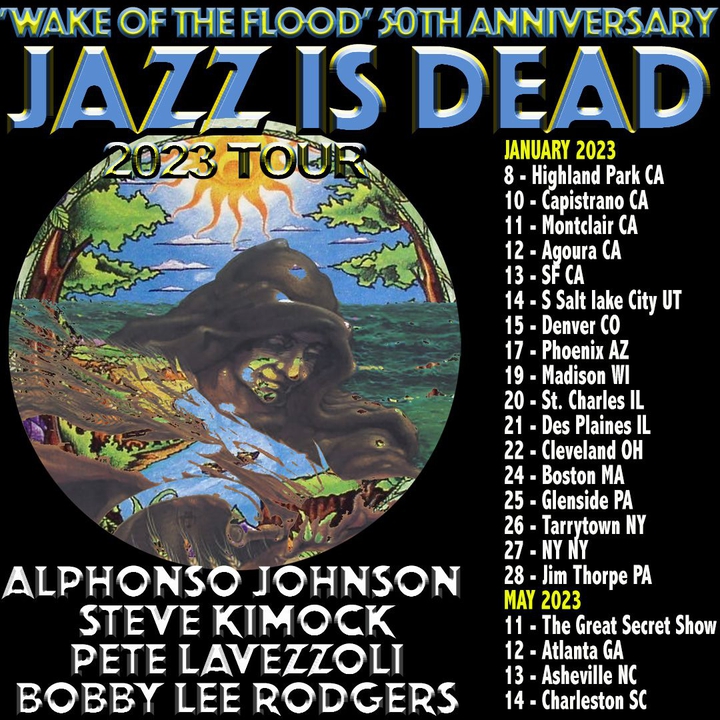 I got tix for Tarrytown... hoping for good enough weather to make it. I hate driving near NYC but shouldn't be too bad I hope on a Friday. Couldn't miss Kimock doing something different, should be good. I know he's new to Jazz Is Dead, I have a couple of their albums and always dug it.
Top

Ha! ... just realized I got tickets for the wrong night. Looks like I'm taking the train to NYC instead of driving to Tarrytown lol
Top

Asheville!!
when the going gets weird, weir turns pro
Top

I just bought a ticket for the first show of the tour on 1/8. I'm really looking forward to this
Top

See you there
"A lovely view of heaven"
Top

Boston is only feasible show

Good news is it won't sell out being a tue

Where’s the secret show? Spill it
"A lovely view of heaven"
Top

Alphonso Johnson With Jazz Is Dead
By grnarrow

Alphonso Johnson is an iconic musician from Philadelphia, Pennsylvania whose contributions with the electric bass set the landscape of music to come. As Weather Report’s bassist, Johnson’s warm tone and fluent chops contributed to the band’s initial breakout from avant-garde into funk fusion. His playing was featured on the songs “Mysterious Traveler”, “Scarlet Woman”, and “Cucumber Slumber” which he co-wrote. Alphonso played with the group Santana and also toured with saxophonist Wayne Shorter, pianist James Beard, drummer Rodney Holmes, and guitarist David Gilmore playing S.R.O. shows that stretched across Europe and Japan. Johnson has taught all over the world and in 2004 was appointed Adjunct Professor of Music at the University of Southern California and Part-Time Lecturer at The California Institute of The Arts.

In early 1982, Johnson joined Grateful Dead member Bob Weir’s side project Bobby and the Midnites. He would reunite with Weir in 2000, playing bass in place of Phil Lesh on tour with The Other Ones. He has also performed fusion versions of Grateful Dead songs alongside Billy Cobham in the band Jazz Is Dead.

The acclaimed All-Star instrumental ensemble, famous for interpretations of classic Grateful Dead songs with jazz influences, returns in 2023 to celebrate its 25th Anniversary. Co-founder Alphonso Johnson will be joined by Steve Kimock, Pete Lavezzoli & Bobby Lee Rodgers, performing Grateful Dead’s ‘Wake of The Flood’ marking it’s 50th Anniversary, in addition to other beloved selections. Jazz Is Dead XXV ‘reunites’ two greats!
Steve Kimock & Alphonso Johnson, who together in heavyweight post-Garcia Grateful Dead offshoot The Other Ones together with Bob Weir, commanded the instrumental prowess of that band.

I had the honor of catching up with Mr. Alphonso Johnson to get into the upcoming concert in Madison on January 19th at The Barrymore Theatre, as Jazz Is Dead comes to keep us company. We get into the idea behind the shows and how the music will guide the way from night to night to night. Mr. Johnson, a natural teacher describes how these 4 cooks bring their individual abilities into the kitchen and we talk a little about the feeling of getting back toGether to find his way through the music with Mr. Steve Kimock. This is one of those events where not only will the music unite, I feel it’s the connection with ALL the people that will be equally as important. Oh no bummer, wow.
Peace be with you
The road goes on forever

Wake of the flood..
Across the Rio Grand-eo
Top

Wake of the flood..
Across the Rio Grand-eo

I want to go to one of these shows but the days they fall during the week are not lining up for me. May have to rely on the tapes.
Top

i'm going to try and do the Cleveland show. Normally a sunday night show is a dead "no" for me but i'm tired of traditional dead cover bands and one that brings it to a whole new genre of music is very appealing to me.
2020 ~ I got a rock ...
Top

Kimock part of the interview.

Jazz Is Dead And Steve Kimock

Steve Kimock has proved himself a master of fluid improvisation for over 4 decades, in the process inspiring music fans w/his transcendent guitar speak voiced thry electric, acoustic, lap & pedal steel guitars. With his multi-decade reputation as a blazing psychedelic guitarist versatile enough to touch almost all aspects of American music, Mr. Kimock continues to evolve creatively as he wanders thru the landscape of life.

While one can say that his genre is rock, no one niche has ever confined him. Instead, through the years, he’s explored various sounds/styles based on what’s moved him at the time, whether it’s blues or jazz; funk or folk; psychedelic or boogie; gypsy or prog-rock; traditional American or world fusion. Threaded thru this expansive & highly nuanced musical landscape is Kimock’s signature sound, the prodigious product of his ability to articulate crystal-clear tone, melody & emotion into intricately woven music crafted with technical brilliance. His passion & devotion to performing live is matchless, and his unparalleled ability to embrace & capture his audiences musically is the stuff of legend.

He co-founded the jazz/rock band Zero in the ‘80s & KVHW in the ‘90s; since then, he has recorded & toured in various outfits under his own name.
His collaborations with assorted band mates & groups have provided an everlasting wellspring of inspiration for the guitarist, and he has shared the stage with a seemingly endless array of international musical luminaries.

After more than 40 years on stage, Mr. Kimock is more committed than ever to a jubilant spirit of musical diversity — the same spirit that has fed his desire to pursue an authentic relationship w/the guitar since the day he realized his calling.

While still performing with Zero, he began to explore new terrain with the looser, bluesier Steve Kimock & Friends, an ever-evolving project that continues to feature a cast of acclaimed singer- songwriters, Hammond B-3 players, rock guitarists and numerous other serious players Kimock has befriended along the way. Late in the century it was succeeded by KVHW, a much lauded though short-lived quartet comprised of himself, Zero bassist Vega, drummer Alan Hertz, & former Frank Zappa sideman Ray White. In February 2000, KVHW morphed into the Steve Kimock Band, which featured Kimock & Vega along with a rotating crew of guitarists & drummers. In 2009, he formed the upbeat, gospel-influenced, soul-rock band Steve Kimock Crazy Engine, which featured legendary Hammond B3 player Melvin Seals & Kimock’s son, John Morgan Kimock, on drums.

Once touted by Jerry Garcia as his “favorite unknown guitar player,” Mr. Kimock has also performed as part of Bob Weir’s Kingfish and toured in both 2007 and 2014 with Bob Weir’s band RatDog, in addition to post-Grateful Dead ensembles including The Other Ones, Phil Lesh & Friends, and the Rhythm Devils featuring Mickey Hart & Bill Kreutzmann. Dubbed “The Guitar Monk” by Relix magazine, he is driven by the knowledge that there is always more to discover – that and the fact that he loves guitar too much to do anything else. Another project you can hear his sound on is Jazz Is Dead – an acclaimed All-Star instrumental ensemble, famous for interpretations of classic Grateful Dead songs with jazz influences.

I had the thrill of getting some time set aside to chat with Mr. Kimock about the upcoming Jazz Is Dead event on January 19th at the Barrymore Theatre here in Madison. We got into the event and what people who make it to the show will be a part of. That’s right, a part of.

We talk about his job of making sure he is in tune with the music, the song and himself – and the practice it takes to be so. I found it thrilling to be in discussion with Mr. Kimock about the idea of making/creating music versus walking in the landscape of what exists and find your way.

There is a moment where we discuss the legacy of this music, and the honoring of Jerry Garcia’s time with it. While I have been in the spiral of the day’s sounds with this artist for years, the evolution that I felt while even just discussing music, makes me very aware of what kind of show anyone who gets out on this Jazz Is Dead XXV tour, where they will honor the Dead’s ‘Wake Of The Flood’ and more. It will be that experience we talk about for years to come.
Top

i wanna see this band so bad, but they are coming nowhere near the dc area. i was lucky enough to see bobby lee rodgers this summer in key west. it was a small pilgrimage that paid huge dividends. hearing him play dead songs would be a peak experience, and with stevie k.. shiiiit. they're gonna wear themselves out tho. the schedule for this tour is brutal. i hope the shows end up on nugs
Top
Post Reply
86 posts